ITE in Barcelona. Most common deficiencies in the buildings of l’Eixample.

ITE in Barcelona. Most common deficiencies in the buildings of l’Eixample.

When carrying out an ITE, two factors must always be taken into account, the year of construction of the building and its construction type. These factors influence the type of deficiencies found.

A crack in a reinforced concrete beam or a crack in a wooden beam does not have the same severity.

Barcelona is a huge city, made up of neighborhoods that in many cases are similar in size to small cities. Each of these neighborhoods was built at different times with different construction methods.

For all these reasons we are forced to analyze each of the Barcelona neighborhoods separately, starting with the Eixample neighborhood.

The neighborhood of the dreta de l’Eixample in Barcelona.

A bit of history:

The Eixample neighborhood began to be built as a result of pla Cerdà in 1860. With this urban plan it was sought to increase quickly and in an orderly way the number of houses in the city, as a result of the need to cope with the large number of people arriving to work in the factories of Barcelona.

During that time, many buildings with similar characteristics were built and that still remain today, the most outstanding are: 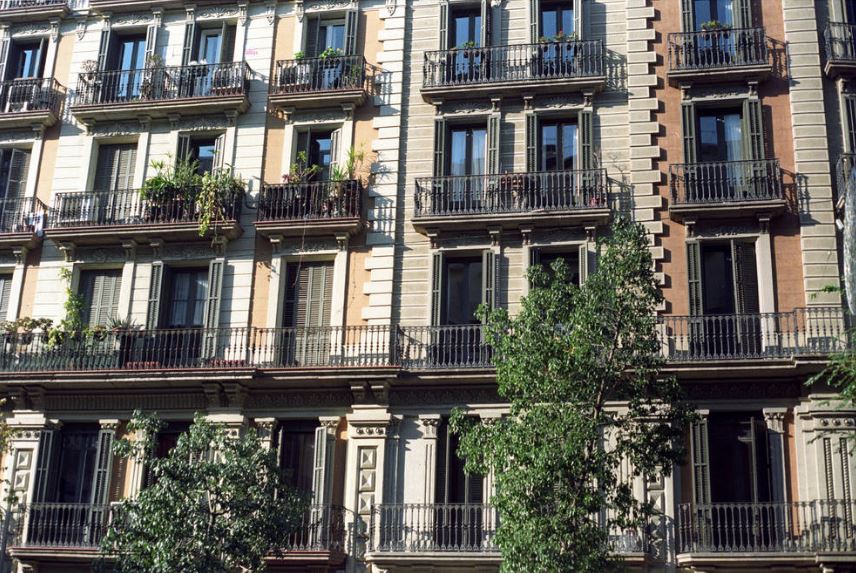 Facades of buildings in the Dreta de l’Eixample.

Unlike the vast majority of the Barcelona neighborhood, where the most common deficiencies in its buildings are those that affect the envelope, in the Eixample neighborhood we find envelopes that are usually well cared for.

The most common deficiencies in l’Eixample buildings are those that affect their structure; Cracks or fissures in beams and floors, structural damage to balconies or cracks in load-bearing walls are some of the most significant examples.

Here we show you listed the deficiencies that we usually find in the buildings of the Dreta de l’Eixample district of Barcelona during the ITE inspection:

Separation between pieces of a balcony marked by a crack

A balcony in poor condition can not only be a danger due to its fall, but it can also be the cause of the appearance of humidity inside the houses. 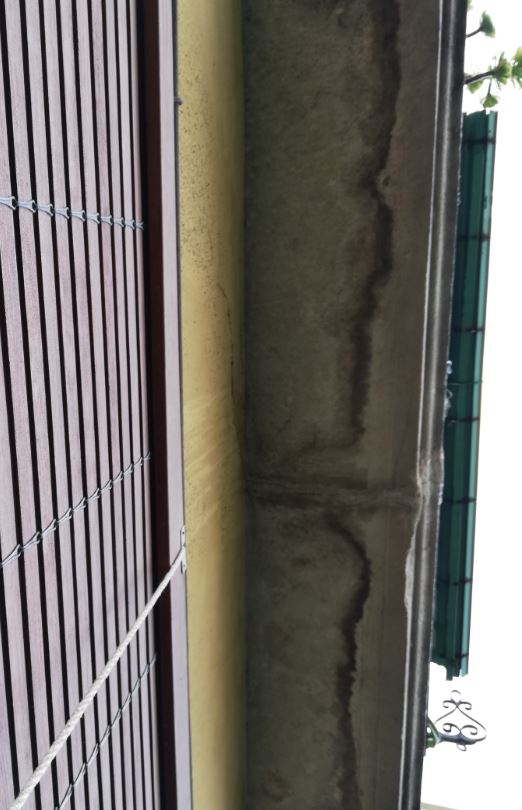 Moisture stains from seepage on a balcony.

Depending on the degree of loss of cohesion and the state of the material of the pieces in the ITE report, these deficiencies can be classified as important or serious.

Wooden beams with fissures or cracks.

Many of the buildings in the area maintain wooden beams as the main elements of the horizontal structure.

All materials used in construction deteriorate over the years and wooden beams are no exception.

During a technical inspection of a building in l’Eixample it is very common to find one or more beams that have lost part of their section due to fissures or cracks produced by structural movements or the degradation of the element, the result of the years. 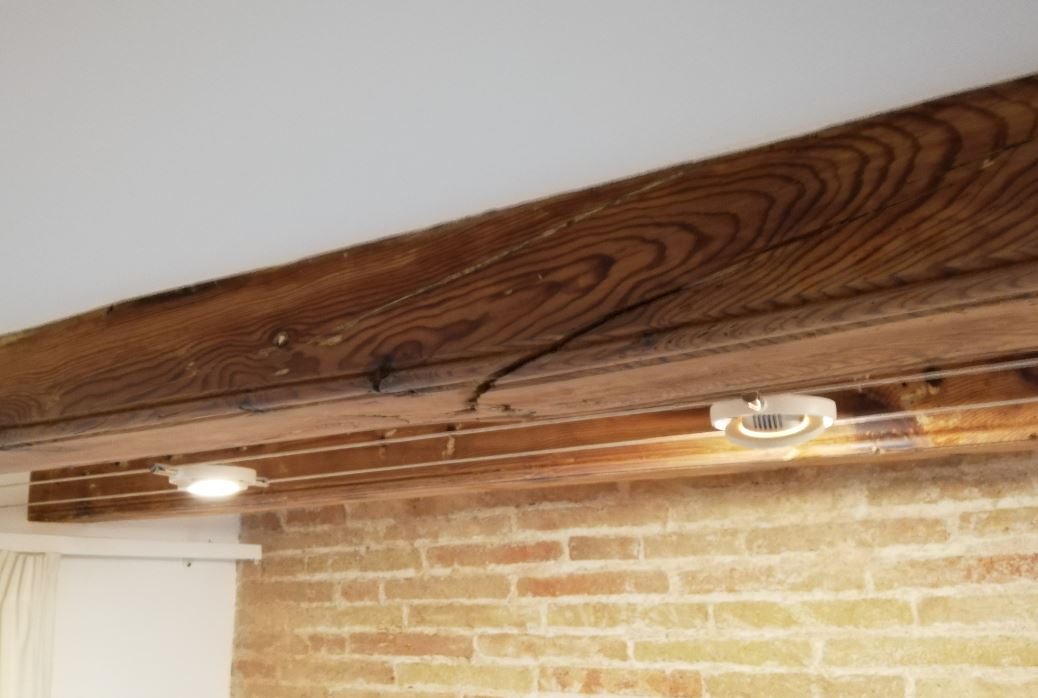 Depending on the section loss and the deflection of the beam, in the ITE report these deficiencies can be classified as important or serious.

In these cases in which the deficiency is classified as serious, it should be resolved as soon as possible, these are the two simplest solutions.

Metallic profiles “glued” to the affected beam are placed, forming a kind of second skin, thus allowing the new profiles to help the beam to withstand the stresses to which it is subjected. 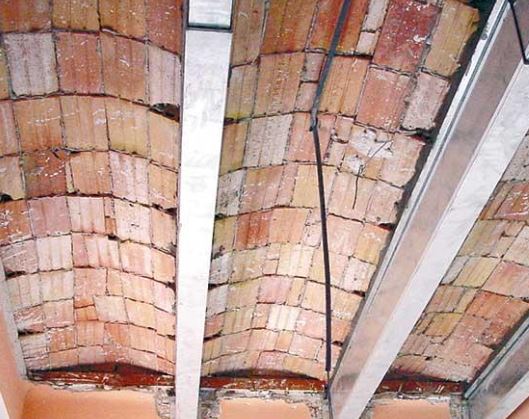 Replacement of the affected beam with a “healthy” beam.

In the event that the section loss is serious, the best solution will be to remove the affected beam (with prior shoring of the slab) and the placement of a new beam.

The repair of the structural wooden elements is very inefficient, this is because the resistance of the wood is based on the natural structure of its fibers, once these are sectioned it is very difficult for the piece to be able to rework at the same level.

Cracks or fissures due to differential settlement.

A differential settlement involves a small subsidence of the foundations of buildings, generating cracks and fissures in the walls and ceilings.

These cracks are usually found in the walls in contact with the adjoining buildings, in the junction of roofs with walls and in facades, sometimes generating cracks that run along the entire facade of the building. 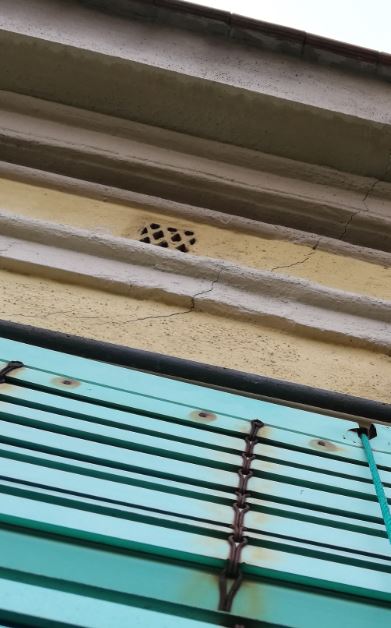 Crack by differential settlement in the facade.

AUnlike what many think when seeing the long cracks, differential settlement cracks do not usually pose a risk to the structure of the building and that is why while significant settlements do not occur, in the ITE report these deficiencies are not usually classified as serious but as mild or important depending on their affectation.

If you have a building in Barcelona and it is over 45 years old contact us so that we can advise you and we can carry out the ITE of your building.